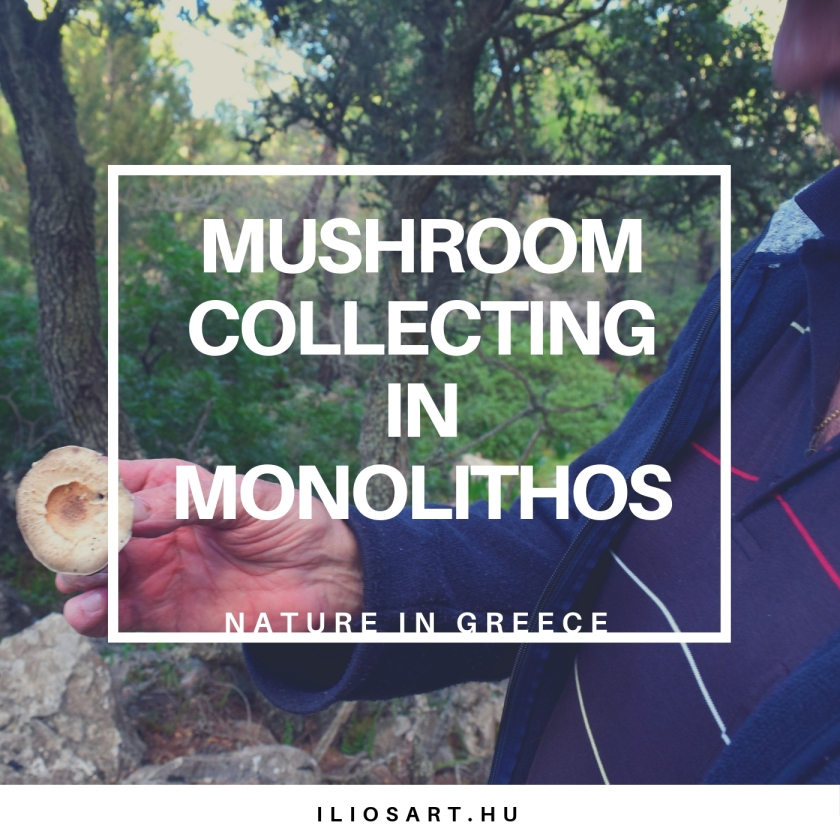 Once upon  a time, last December I visited the charming, peaceful mountain village in the southwestern coast of Rhodes island called Monolithos. The name Monolithos means ‘single rock’. The village got its name from the nearby castle that was built 300 meters above sea level on a ‘single rock’ in the Byzantine era and which was fortified in 1476 by the Grand Master of the Knights of Rhodes, Pierre d’Aubusson. It has majestic view, one of the main attractions of the island. It has a small church inside the remains of the walls of the castle worshiping Agios Panteleimon. 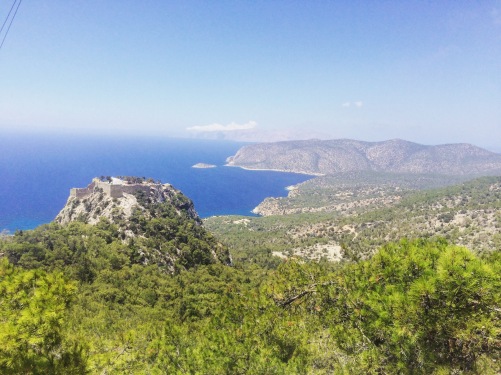 My visit to the village had a certain purpose that time, because I was invited for a mushroom collecting walk in the neighbouring pineforest by Manolis and Despoina the owners and chefs of the one and only Old Monolithos Taverna inside Monolithos village. Their kitchen is always authentic, clean, fresh, local and of course the food is made by lots of care and love with decades of experience. Because of this authentic kitchen with the fresh ingredients, all of their meals have an intense taste (a real taste) without using much seasoning. So they have full respect for the seasons, the nature, and they know that eating everything in the right time is the best. “κάθε πράγμα στον καιρό του” – as the Greeks say.

December time of the year therefore they go for wild mushrooms up to Akramitis mountain into the forest 1-2 days after rain (because a mushroom grows in about 4 hours). Collecting mushrooms is not very common amongst the locals, because it requires experience to recognize the mushroom species, so most of the people do not risk it and they do it very well. Because as Manolis says: “Every mushroom is eatable. But some of them are edible only once.” He has been studying the local mushrooms for many years now by reading appropriate books, and he was also taught by another local man from Siana village, who has learnt his knowledge from old people with big experience about nature. The most fertile area for mushrooms on Rhodes island is definitely the area around Istrios village, where locals have traditional mushroom recipes (for example: manites giahni or manites sto tigani). The villages of Rhodes are not really big ones (especially on the south region), but they have their own traditional dishes based on their own natural resources and agricultural activities. Of course these characteristics are disappearing from the practice, so we should highlight them and spread the word before it is too late. First of all the most important part of this knowledge is recognizing the edible species, but every year there are some accidents because people collect toxic mushrooms without appropriate knowledge.

Some villagers often come to Manolis to check the mushrooms together that they’ve collected. So I felt safe enough to stay also for a mushroom meal also after our walk in the forest. 😉 We went to the forest with a truck and we took also Beba with us, the dog of Old Monolithos. Beba had so much fun I guess. 😀 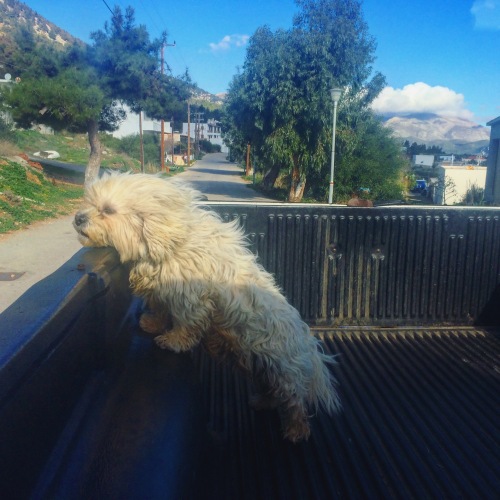 Beba is travelling with us, Attaviros mountain in the background, Rhodes island / photo credit: Mariann Lipcsei

Beba has the best view ever – sea and the caste of Monolithos / photo credit: Mariann Lipcsei

To be honest I wouldn’t found myself this road that leaded us inside the pine forest, that belongs to the ancient Kimissalas area. “The Department of Mediterranean Studies, in the University of the Aegean is conducting intensive archaeological research on this ancient Demos of Kimissalas. Kimissala constitutes one of the most important and extensive archaeological sites in the countryside of Rhodes. This network of sites is situated within the heart of an area of unique geomorphology, with rare species of fauna and flora in the Aegean region, protected by the European Project Natura 2000.” /www.thomashotel.gr/ 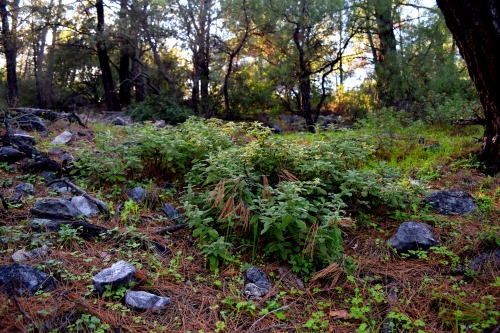 This part of Rhodes was new for me, and I fell in love with it of course… The smell of the sage bushes and the forest after rain with the green scenery around, the high trees growing towards the sky, the joy of the searching, the nice walk on the carpet of the forest, the silence gave me so much. The cherry on top was the tiny monastery called Avakous in the middle of the green built by stones. Locals honor the saint of the church every year on the Friday after Easter.

Despoina lit the candle inside and burnt the incense in the porta of the monastery. 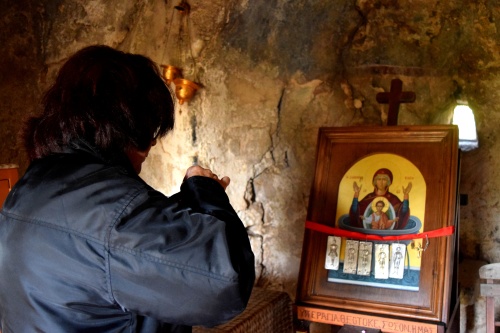 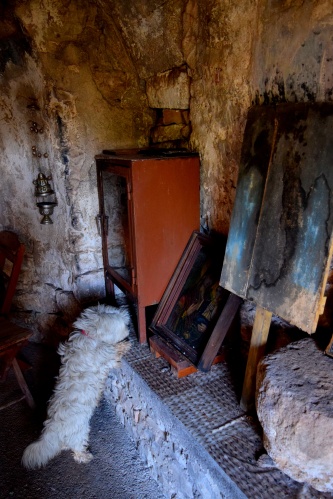 Although Manolis tried to help me about mushroom searching, I did not have the eye for that, so I was simply walking without any results. At least edible results. He told me about the right way of taking mushrooms off: “Most of the people don’t know how to collect them properly and they do damage to the area. The right way is to plug them all, or cut them from where they grow and then cover them with brunches to avoid drying out.” 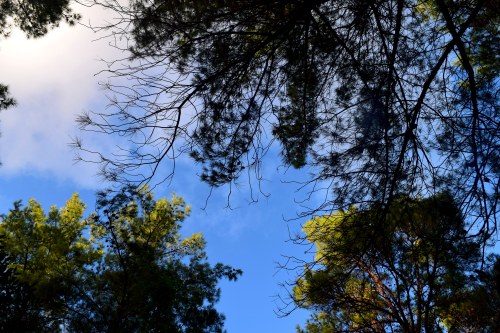 He did collect some eatable ones. He said that the forest did not have many mushrooms that day. But Manolis found agaricus, lepiota mastoidea, and lepista nunda species.

We went back to Old Monolithos taverna, where Despoina and Manolis were cooking a wonderful lunch in 20 minutes, which included 2 different mushroom recipes. One from Despoina, and one from Manoli. And why is it healthy to eat mushrooms? Because they contain potassium, phosphorus, selenium and they have a high protein content.

Here you are both mushroom dishes of Despoina and Manolis:

Put the mushrooms into boiling salty water for few seconds and then drain them. Mix 1-2 eggs with oregano, salt and pepper. Dip the mushrooms into flour, then into the eggs, finally into bread crumbs, and fry them in very hot oil to have a golden-brown color.

Drying the mushrooms after boiling them / photo credit: Mariann Lipcsei

2. Mushrooms in the pan by Manolis

Pour some olive oil in a pan, heat it up. Add the mushrooms, add roughly chopped garlic (which highlights the taste of the mushrooms), grinded coriander seeds, little pepper, chili pepper flakes, dry white wine, metaxa for a little sweet flavour. Fry them together until the mushroom is ready, and few seconds before you take it off from the fire add a little bit of flour on top. Finally add fresh finely chopped parsley on top that helps us in the better digestion of mushrooms. 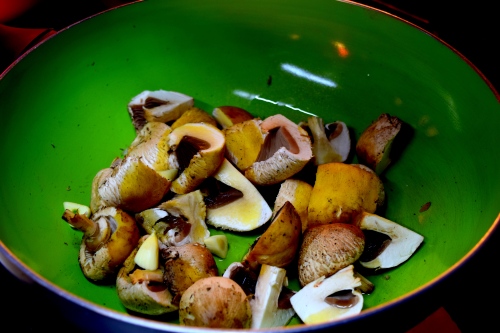 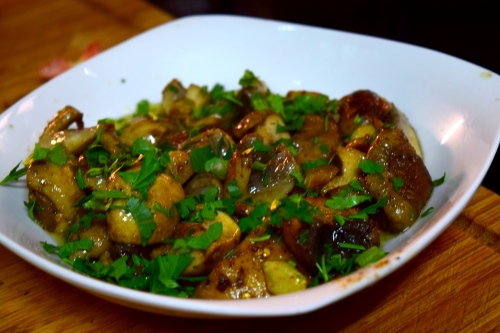 In the meanwhile Despoina was frying potatoes for us and then made an amazing Greek salad in few minutes. 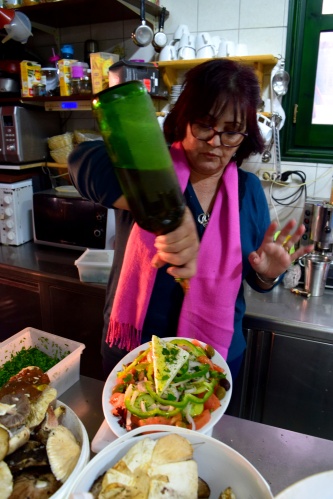 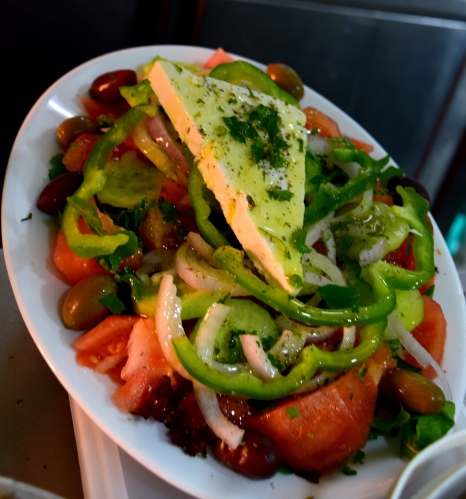 Royal table in 20 minutes of course with some local village bread:

And also Beba was asking for her treat on the floor:

It was such a wonderful experience. Knowing more and more about nature, food culture, and the way how we can live more and more connected to it gives me unbeliveable joy. Nature is the only direction – inside and outside also.

And before finishing this post I would like to add 2 more traditional mushroom recipes, both from Istrios village which I translated from the truly amazing book: ‘Makria Mirodia’ (more information here). A book that gathered the traditional recipes of all the villages of Rhodes island.

Wash the mushrooms well and cut them into 4 pieces, or only 2 (if they are small). Pour the olive oil in a pan to heat up. Put inside the mushrooms also and fry them. Add the onion. When they become withered add the garlic, the tomatoe sauce, the salt and the pepper. Leave it on the fire for about 7-8 minutes.

Wash the mushrooms well and cut them into 4 pieces, or only 2 (if they are small). Pour the olive oil in a pan to heat up. Put inside the mushrooms also and fry them. Add the onion, the cumin, the salt and pepper. We continue frying them until it is ready.

The point of my evergreen wreath was to create something beautiful by using only local seasonal plant materials from the Rhodian landscape and to celebrate Winter solstice. 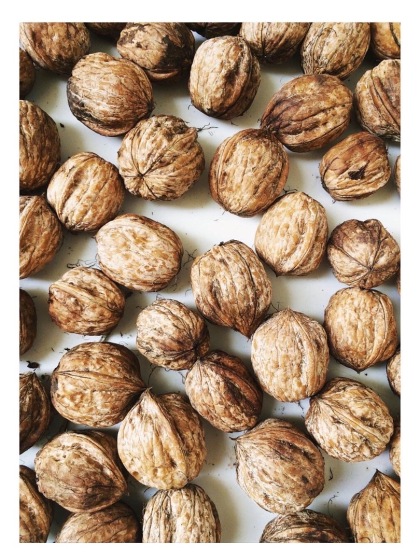 Connecting to nature - traditional ways of using walnut on the island of the Sun.